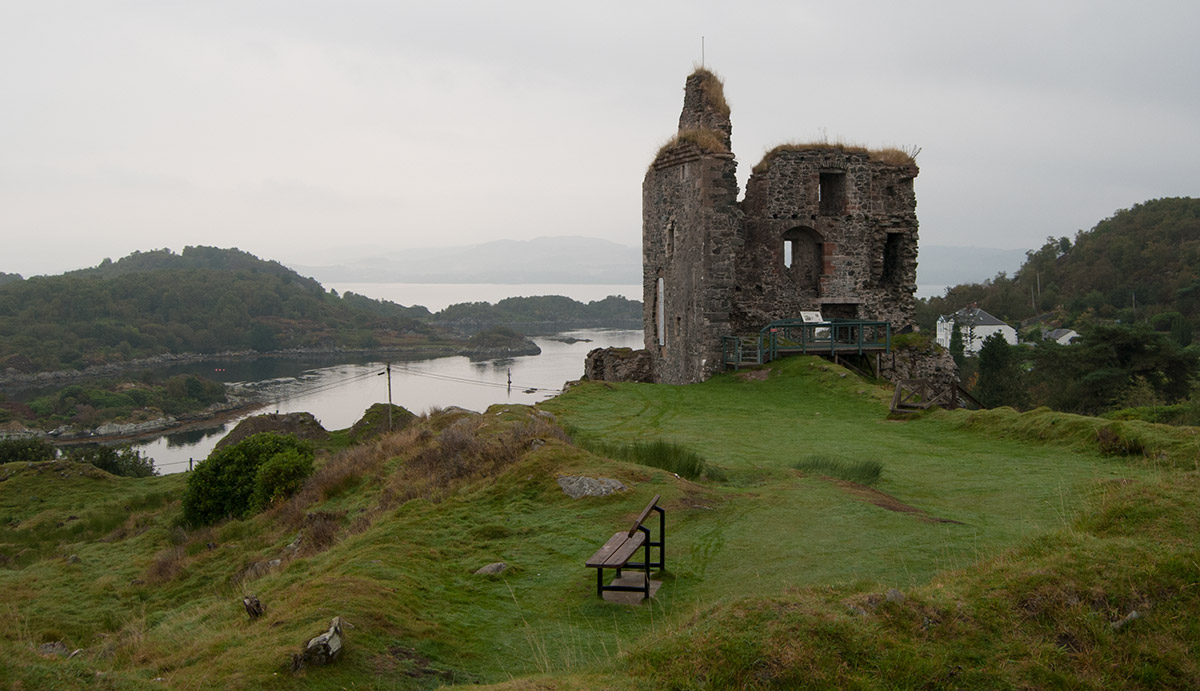 The remains of the Royal Castle of Tarbert. John de Lany (the first of Maolan's descendants) was constable of the castle in 1326. It had hosted both Robert Bruce and James IV.

The 16th century pedigree of the lairds of Leny also constitutes the second oldest genealogy of the MacMillans. This fascinating old document, now in the National Archives of Scotland, is actually constructed in the form of a primitive tree (pictured below right), with Gilespic Mor ("the Great Bishop" - i.e. Cormac bishop of Dunkeld) at its root, Maolan de Lany and his successors - the "Lennies of that Ilk" - forming the main trunk up to the various branches of the Buchanans of Leny at the top (the marriage of Janet de Lany to John Buchanan in 1392 eventually resulted in the Buchanans inheriting the Leny estates). There are many other boughs coming off the trunk on the way up, but few have any fruit showing. While it's impossible to get a good enough copy of the whole tree to reproduce, we can show a cleaned-up version of a part of it which is particularly significant for the history of the MacMillans:

Reading this section from the bottom up, the first name is Gilibile Macgilespic de Lany from whom branch off to the right the Macgilbiles in Lochaber. Above him is Colmin Macgilbile, from whom the Macolmins in Airgile & Cintyre; then Maolan Macolmin - the second Maolan in a pedigree which has clearly been deliberately extended by the use of repetitions - from whom are said to come the Macmillans in Airgile & Braedalbin. Next is Maoldonich, the first of two on the tree (from whom come the MacMaoldonichs in Strathearn), and he's followed by a second Gilibile. The appearance of the name Gili-bile as a phonetic version of Gillemaol is particularly interesting, as it clearly shows the origin of the septname Bell, and indicates that M'millans may have been called Bile/Bell at a much earlier date than has hitherto been thought. The fact that the English-speaking Buchanan of Leny who compiled the tree was not aware of the equivalence of Maolan and Gillemaol means that he includes the clan's progenitor twice. Though initially confusing, this is actually rather useful, since in each case the eponym's father is given as Gilespic (and his son as Colmin - i.e. Malcolm), thus confirming the tradition about his parentage (and the clan's connection with the MacColmins or MacMalcolms), and making it clear that the Lochaber MacGhillemhaoils were of the same stock as the Argyll MacMhaolains.

The Leny story also reveals how and why the sword became such an important symbol for MacMillans (appearing on Alexander MacMillan's Cross at Kilmory Knap, and being wielded in two hands as the clan crest). William Buchanan of Auchmar, in his account of the family, tells that …the Lennies, while Owners of that Estate, had no Charters of the same, but a large Sword, with which, it seems, he, who first of that Name acquired these Lands, had performed some signal Achievement, being a Means of his first Advancement.... The lairds of Leny later had a silver "claibeg" (lttle sword) which was handed down in the family as memento of the original "claighmor", and it survived to be drawn thus for the magazine Archaeologia in 1789:

Although the name Leny/Lennie is generally supposed in Scotland to come from the Gaelic leanaidh meaning "wet meadows" - and as such it appears elewhere in the country as a place name - the symbolic significance of the sword amongst Gilleasbuig Mor's descendants in Scotland suggests that it may in fact derive from lann or lainne meaning "the blade of a sword". This is considered in Ireland to be the derivation of the names O'Lainidh and O'Lainne which in Ulster are Anglicised to Laney and traditionally connected with Clan Colla of Oriel; the Irish kindred with whom the Lenys' and MacMillans' ancestors were anciently allied. It must be possible therefore that some at least of the Irish Laneys were also descendants of Cormac "Gilleasbuig Mor", the wielder of the sword and ancestor of the MacMillans; and in this respect it's interesting to see that a coat of arms registered for a family of Lanys in Dublin is clearly related to those borne both by the Lennies of that Ilk and by the McMillans in Galloway and Ulster:

Back in Scotland, in a traditional tale about a feud between Black Duncan of the Cowl (Campbell of Lochawe) and Buchanan of Bochastle, the place Leny appears in the Gaelic not as Leanaidh but as Lainidh; and in fact de Lany rather than de Leny seems to have been the usual medieval spelling of the name in English and Latin records too. All of this suggests that the Leny's Perthshire seat just outside Callander derived its name from its lairds, rather than them taking their name from it as has hitherto been assumed; as was certainly the case in Midlothian for the family's lands in the parish of Cramond. Auchmar states that there is not "…so much as any traditional Account of any Lands belonging to the old family of Lenny, except those of that name in Perth-shire and a Part of those so designed in Midlothian...". In fact their Perthshire estates stretched well into Mentieth; and in addition to the 1270 charter for Drumquhassle, a 14th century charter from Robert the Bruce for Boquhan, near Kippen in Stirlingshire is mentioned on two Great Seal rolls.

The names of people and places in the vicinity of Leny in the late middle ages provide further evidence of the original Lennies' kindred connections. An inquest jury of the 1520s about the succession to nearby Gartincaber included an And. M'Kane, whose family were probably connected at some time with the neighbouring farm of Mackeanston - see MacChannanichs/Cannons. About half way between Boquhan and Leny is the Lennieston Muir, on which stand the farms of Easter and Wester Lennieston; and alongside them is to be found Ballanucater, "the township of the Walkers": the Walkers being one of the oldest known septs of the MacMillans. The name Balgibbon is also to be found a couple of miles south east of Leny itself, on the outskirts of Callander; and many, if not all MacGibbons take their name from Gibbon fiz Kan (i.e. "Gibbon son of Can" - Can or Cathan being Maolan's great-grandson).

For a MacMillan historian two of the most striking things to emerge from the old de Lany family tree can be found in a note on the bottom left-hand corner of the document written in sixteenth century Scots:

This can be "translated" roughly as follows:

"It is well known by the shennachies that the first "aleuin"(?) of the old Lenys were riders, which is to say knights; and some of them were famous men, notably the Great Rider who got the small sword from the king for his good deeds, and the Grey Rider who slew in war the big horseman; and also the freckled rider who slew the large boar in front of the King, from which deed we got our insignia and arms". (Coat of arms)

The boar from this story appears in the Leny arms described by Buchanan of Auchmar, and shown at right- which can be compared to the arms above it which form the de Lany quarters of the Buchanan of Leny arms. The designation of the Leny ancestors as "riders" would appear to be reflected in a very unexpected way in one of the most important of all MacMillan monuments in Knapdale; the cross erected at Kilmory in the sixteenth century in memory of Duncan, son of Malcolm MacMillan (and grandson of the Alexander depicted on the more famous MacMillan Cross in the same place) which features on its shaft a helmeted and spear-carrying rider on horseback. Though the Kilmory kirkyard and many others in the West Highlands and islands abound in tombstones with sword-carrying helmeted figures on foot, a mounted warrior is a rarity; and this reinforces the idea that Gilchrist "Maolan" mac Cormaic may have been tonsured as a crusading knight.

The story of the Lennies, and the various accords between it and MacMillan history - assuming they are not all to be taken as mere coincidences - constitute therefore a remarkable record of a kindred keeping up connections from the time of their common ancestor in the twelfth century to the disappearance of the Lennies in the fifteenth, and on down to the late eighteenth century; though it would appear that even by the fourteenth century their two worlds had drifted far apart. We are fortunate indeed that the traditions of their family and their ancestry meant so much to these "People of the Sword" that they were transmitted orally to their successors as lairds of Leny, who wrote them down only a century or so after inheriting the estate; and thankfully just prior to the great age of pedigree faking. Come that era an unknown Buchanan then tried to cut and paste his clan into the de Lany line early, to be followed by Auchmar's attempt to usurp the whole lineage so as to make them all Buchanans in the first place. The audaciousness of Auchmar's sept-napping endeavours simply stand, however, as further evidence of the importance of Clann an Mhaoil in later medieval Scotland; even if we have to seek for them in the contemporary records under a variety of names other than "MacMillan".

The above is a edited extract from Appendix 3 of The Origins and Early History of the MacMillans and Related Kindreds by Graeme M. Mackenzie, which is available from the Books & Publications page.

See also Graeme Mackenzie's article "The De Lanys or Lennies of that Ilk" in Vol. L, No. 1 (March 2003) of The Scottish Genealogist.

Leny of that Ilk

Leny arms as described by Buchanan of Auchmar